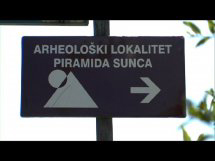 In Visoko, a far-flung town in the heart of Bosnia, there are two hills that look like pyramids. More than two years ago, Semir Osmanagic, an American businessman originally from Bosnia, arrived in this small village claiming that the hills surrounding the town were actually covering pyramids that are thousands of years old, the last evidence of the legendary historic greatness of Bosnia. From that moment, life in Visoko was never the same. And Semir has become a celebrity. A true national hero. Semir and his pyramids arrived just in time. Bosnia was more in need than ever of a great man and a great tradition that could give importance to a country deeply wounded and martyred by war. This film is a human comedy that, between its light and at times bitter tones, recounts a year in the life of this microcosm just after the pyramid discovery.