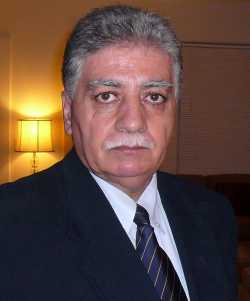 The life of Dr. Donny George is interwoven with some of the world's most famous antiquities and archaeological sites and with the international struggle to save the world’s threatened cultural patrimony. A native of Al-Anbar Province, Iraq, Dr. George received his B.A., M.A. and Ph.D. credentials in prehistoric archaeology at the University of Baghdad and carried out archaeological fieldwork at such fabled sites as Nineveh and Babylon, where he served as Field Director for site restoration.

Dr. George, a Christian, was a mid-level official in the Baath Party under Saddam Hussein’s government, serving as Director-General of Iraqi Museums from 2003 until 2005. As Director of the National Museum at the time U.S. forces entered Baghdad in 2003, he further distinguished himself in his attempts to protect the museum’s priceless collections from the looting that followed. After the looting of the Baghdad Museum, Dr. George’s name appeared in newspapers the world over as the international press struggled to comprehend and to document this historic tragedy.

In the years since the Baghdad looting, Dr. George’s tireless efforts were instrumental in the recovery of nearly half of the more than 15,000 stolen cultural objects, including many of ancient Mesopotamia’s most important treasures. Through his continuing efforts as an advocate for the recovery and protection of antiquities generally, Dr. George has since become the international face of the plight of ancient archaeological sites throughout Iraq and the “Fertile Crescent,” which suffer today as extensive, organized site-looting continues.

In 2005 Dr. George became Chairman of the prestigious Iraqi State Board of Antiquities and Heritage, but in 2006 was forced by death threats to flee his native country. From relative safety in Damascas, Dr. George and his family eventually found refuge in this country, where he is currently Visiting Professor at the State University of New York at Stony Brook. Since his arrival in the U.S., Dr. George has been busy speaking to international audiences about the destruction of Iraq’s cultural heritage, and he works to raise public awareness about ongoing threats to the world’s irreplaceable cultural record. In carrying out this important work, Dr. George has lectured internationally in Belgium, Denmark, Germany, Italy, Japan, Jordan, Spain, Sweden, and the UK. He also has spoken widely in this country, with public engagements in Boston, Chicago, New York City, Philadelphia, Phoenix, Taos, and elsewhere.

In May 2008, Archaeological Legacy Institute (ALI) will host Dr. George’s first West Coast appearance, where he will deliver the opening address for the fifth anniversary of The Archaeology Channel International Film and Video Festival, in Eugene, Oregon. ALI is honored and delighted that Dr. George has accepted this invitation. It is with great pleasure that we welcome him to Eugene and to Oregon as distinguished Keynote Speaker for the Western Hemisphere’s only juried competition of international archaeological film.