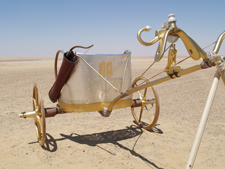 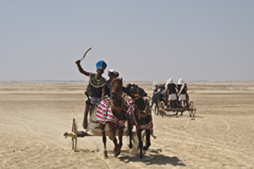 3,600 year-old reliefs in Egyptian tombs and temples depict pharaohs and warriors proudly riding into battle on horse-drawn chariots.  Some historians claim that the chariot launched a technological and strategic revolution.  But was the Egyptian chariot really a revolutionary design?  How decisive a role did it play in the bloody battles of the ancient world?  In Building Pharaoh’s Chariot, a team of archaeologists, engineers, woodworkers, and horse trainers join forces to build and test two highly accurate replicas of Egyptian royal chariots.  They discovered the use of advanced features, including spoked wheels, springs, shock absorbers, anti-roll bars, and a convex-shaped rear mirror, leading to the comparison of design to the engineering standards of the 1930s era Buicks!  By driving our pair of replicas to their limits in the desert outside Cairo, NOVA’s experts test the claim that the chariot marks a crucial turning point in ancient military history.