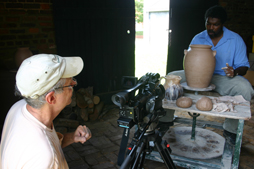 This documentary revolves around the story of the Edgefield, South Carolina, slave potter named David Drake.  David, who used his skills as a craftsman, created beautiful pottery, which included jars and pitchers, during the turbulent 1800s.  While producing thousands of pots in his lifetime, David also wrote poetry.  He was one of the first African-American slaves to sign many of his works.  His story is a testament to his willingness to be heard and to leave his mark for ages to come, even at risk of severe punishment.