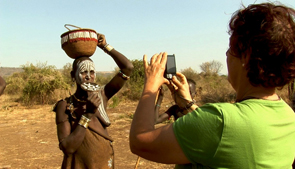 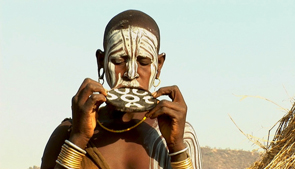 The Mursi tribe resides in the basin of the Omo River, in the east African state of Ethiopia.  Mursi women are known for placing large plates in their lower lips and wearing enormous, richly decorated earrings, which have become a subject of tourist attraction in recent years.;  Each year, hundreds of Western tourists come to see the unusually adorned natives, so that posing for camera-toting visitors has become the main source of income for the Mursi.  To make more money, they embellish their “costumes” and finery to appear more exotic to the outsiders.  However, by exaggerating their habits and lifestyle in such a manner, they are beginning to disintegrate their traditional culture.  This film portrays the complex relationship between tourism and indigenous communities by revealing the intimate and intriguing thoughts of a Mursi woman from southern Ethiopia and a Dutch tourist as they prepare to meet each other.  This humorous, yet simultaneously chilling, film shows the destructive impact tourism has on traditional communities.