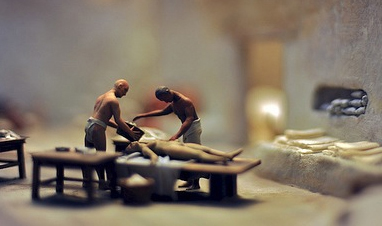 In 1871, in the cliffs of Deir El Behri near the village of Qurna, not far from Luxor in Egypt, a young boy called Ahmed El-Rassul accidentally discovered a hidden tomb in the belly of the mountain near his home.  Ahmed and his family looted the tomb for over a decade until their activities became known to the Egyptian antiquities service.  When archaeologists arrived, they were stunned by what they saw.  The tomb contained more than fifty royal mummies.  This sensational discovery had a profound impact on what was known of Egyptian history and reminded everyone that looting has been an Egyptian nemesis for thousands of years.