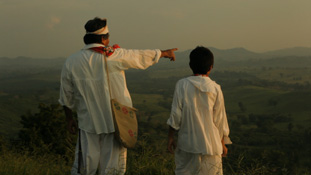 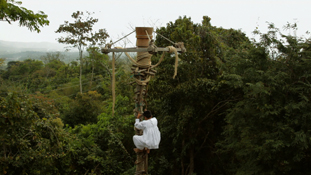 This is a study of the rich cultural traditions of the Totonac people of Veracruz, Mexico, who have resided there for thousands of years. In Spanish, the term “canicula” referes to the forty most torrid days of the year. For the Totonac, this period, known as the “days of the bleeding sun,” is marked with important rites and ceremonies. When the time comes, four boys and one elder climb to the top of a pole that rises above the forest. The eldest takes his place at the very top, where he performs a traditional song and dance while the four boys cast themselves backwards, only their feet tied by a rope, as they spin around the pole to make their descent. This ceremony of symbolic sacrifice and rebirth dates back 500 years and continues to be an important element in the preservation of the Totonac culture and identity.