Searching for the Truth 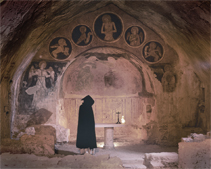 Beneath the Medieval city of Narni, an Umbrian town in central Italy, a  young team of cavers discovers a series of mysterious underground rooms dating to the Holy Inquisition.  They began a thirty year quest for the truth behind the underground rooms and the meaning of a complex sequence of graffiti that was applied to the walls by an enigmatic prisoner in 1759.  A series of chance encounters and coincidences illuminates a trail of stolen documents, secret archives and an archaeological quest to reconstruct a page deleted from history.