The tenth installment of The Archaeology Channel International Film and Video Festival will take place May 7-11, 2013, in the Recital Hall of The Shedd Institute, in downtown Eugene, Oregon, USA.  This event is the only international competition in the Western Hemisphere featuring films on archaeology and indigenous peoples.  (Scroll down to learn more about the Festival.)  We invite you and your organization to be a part of this unique event by joining our sponsorship group.  Sponsorship opportunities and benefits are listed on our Sponsorship Commitment Form [link to SponsorForm&Benefits.pdf] and at the bottom of this page.  You can send us your completed form or query us via e-mail to This email address is being protected from spambots. You need JavaScript enabled to view it., fax it to 541-339-3109, or mail it (with your check) to ALI, P.O. Box 5302, Eugene, OR 97405. 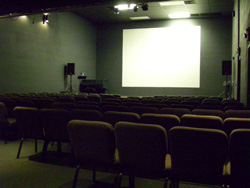 Similar festivals exist in several European countries, but our Festival is the only one on this side of the planet.  As a corporate or organizational sponsor helping to make this event the success it can be, you will be acknowledged in our Festival program, in our on-screen slide show, and on The Archaeology Channel (http://www.archaeologychannel.org), which is one of the most popular Web sites of its kind in the world.  Other benefits to you are listed on the Sponsorship Commitment Form.

Please help us make the Festival a grand success.  Thanks very much for your consideration.

The Archaeology Channel International Film and Video Festival is the only public competition in the Western Hemisphere featuring films about the human past and our shared cultural heritage.  This international event draws worldwide participation.  Our 2013 edition represents the tenth annual installment of this event.  For the 2013 Festival edition, we expect to receive dozens of film entries from many countries and will screen the best of these for the May competition.  As part of this event, we again will host an internationally acclaimed Keynote Speaker, whose name is yet to be announced.  Again this year, will conduct a field tour to the Cascadia Cave rock art site.  In 2013, as we do each year, we plan a suite of complementary activities at the University of Oregon Baker Downtown Center, which will include our Conference on Cultural Heritage Film, and our Video Bar, where all can see any of our film entries at individual viewing stations.

The tenth installment of TAC Festival will be held May 7-11, 2013.  Film screenings take place in the Recital Hall at The Shedd Institute, in downtown Eugene, with other activities at the Baker Downtown Center.

How do sponsors benefit?

Sponsors ofTAC Festival will gain visibility to our audience in a wide variety of ways, depending on the level of their sponsorship.  Sponsors will be acknowledged in these ways:

Depending on contribution level, sponsors will receive complimentary benefits, which may include: 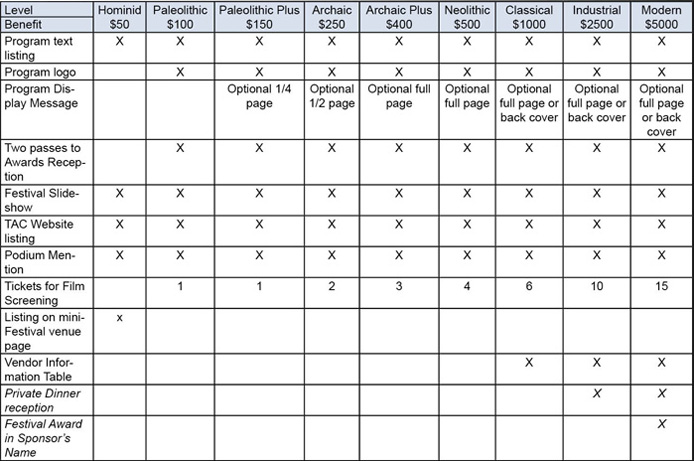