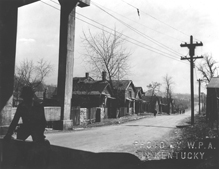 Davis Bottom: Rare History, Valuable Lives reveals the fascinating history of a diverse, working-class neighborhood.  Davis Bottom, established in 1865, is one of about a dozen ethnic enclaves settled primarily by African-American families who migrated to Lexington from the 1860s to the 1890s in search of jobs, security and opportunity.  Davis Bottom, located in a narrow, swampy valley about a mile south of downtown Lexington, is named after Willard Davis, a land speculator and civil rights advocate who became the Attorney General for the State of Kansas.   Over the past 150 years, residents have made this small, tight-knit neighborhood a hidden model for racial diversity and community cohesion.  Today this enclave is facing a challenge with the construction of the Newtown Pike Extension, a roadway that has displaced many residents.  This part of history is now being documented as part of The Davis Bottom History Preservation Project.