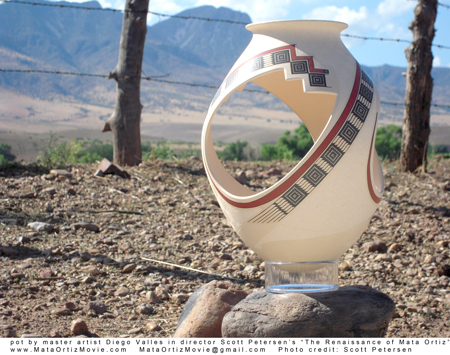 When anthropologist Spencer MacCallum walked into a second-hand store in Deming, New Mexico, in 1976 and bought three pieces of pottery, he had no idea that he was about to embark on a journey that would lead to the revival of an ancient art form.  Finding his way to Mata Ortiz, México, MacCallum partnered with self-taught artist Juan Quezada and slowly they created an industry that today is known world-wide not only for its interpretations of a centuries-old style of ceramics, but for stunning post-modern works as well. The Renaissance of Mata Ortiz tells the improbable story of how Quezada (without a kiln or a potter’s wheel and using only found materials) and MacCallum both experienced creative and personal breakthroughs which led to dazzling, innovating works by Quezada and a passing of the torch to younger, award-winning artists such as Diego Valles.