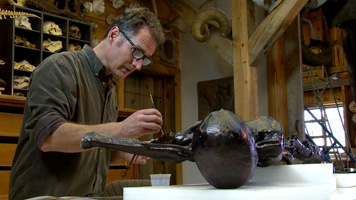 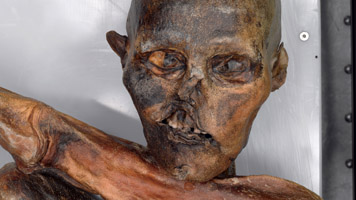 He was stalked, attacked and left to die alone. Murdered more than 5,000 years ago, Oetzi the Iceman is Europe’s oldest known natural mummy. Miraculously preserved in glacial ice, his remarkably intact remains continue to provide scientists, historians and archaeologists with groundbreaking discoveries about a crucial time in human history. But in order to protect him from contamination, this extraordinary body has been locked away, out of reach, in a frozen crypt—until now. NOVA joins renowned artist paleo-sculptor Gary Staab as he has been granted rare access into the Iceman’s frozen lair. Gary has been charged with creating an exact replica of the mummy, which scientists and the public alike then can study up close and in person. As we see the Iceman’s rebirth from 3D printing, resin, clay, and paint, new revelations about Oetzi’s life and legacy come to light, including surprising secrets hidden in his genetic code.