A Fragile Balance: Population and Environment in Early State Societies

Dr. Scarre, Deputy Director of the McDonald Institute at the University of Cambridge and a specialist in early state societies, offers his views on what the modern world can learn from the experience of ancient civilizations who faced critical environmental challenges.

"Sustainability" has become a buzz word in our times, but its frequent use reflects a growing unease about the course of human exploitation of our planet. Nuclear catastrophe was the nightmare of the 20th century, but ecological collapse is the nightmare of the 21st. As the human population grows, as the global climate warms from greenhouse gas emissions, and as plant and animal species disappear along with their natural habitats, humanity must address the question of the sustainability of natural and socioeconomic systems. How long can we continue the current mode of economic exploitation without undermining the natural systems on which we depend?

Because the sustainability issue involves the complexities of human interaction with the environment, archaeology has a critically valuable role to play in the discussion. Indeed, the time-depth perspective of archaeology may be essential to a full understanding of the processes that have led us to this situation. And the study of past human responses to threats of this kind may offer guidance as we consider how to mobilize a worldwide response in our own day to a threat that may not be obvious until it is too late to avert.

As a contribution to the global discussion of this critical problem, we have invited a series of archaeologists researching the matter to submit Audio Commentaries about the lessons that archaeology may offer the modern world. In this way, we hope to promote a dialogue that will encourage further archaeological research with applications to this and other modern problems.

Our first Audio Commentary on sustainability is by Dr. Christopher Scarre of the University of Cambridge. Dr. Scarre approaches the issue as one who studies early state-level societies around the world. We offer our sincere thanks to Dr. Scarre for sharing his thoughts. 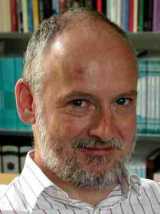 Chris Scarre is an archaeologist specializing in the prehistory of Europe and the Mediterranean, with a particular interest in the archaeology of the Atlantic facade (Iberia, France, Britain, and Ireland). He took his M.A. and Ph.D. degrees at Cambridge, the latter a study of landscape change and archaeological sites in western France. He has participated in fieldwork projects in Britain, France and Greece and has directed excavations at Neolithic settlement and mortuary sites in western France. His early work was published in Ancient France (Edinburgh University Press 1983). He is currently Deputy Director of the McDonald Institute for Archaeological Research, University of Cambridge, and editor of the twice-yearly Cambridge Archaeological Journal. As a Fellow of Girton College, Cambridge, he teaches a wide range of archaeological subjects from early stone use in the Paleolithic to the expansion of the Roman empire. He is author with Brian Fagan of the textbook Ancient Civilizations (Addison Wesley 1997), a revised second edition of which is currently in preparation.
His research interests include the relationship of prehistoric monuments to their landscape setting; the use of color in prehistoric societies; and the development and character of early state societies. Recent papers have considered the meanings which prehistoric societies may have attached to natural landscape features in Brittany, and the manner in which those meanings were given material expression through the construction of burial mounds or settings of standing stones. The nature of early farming societies along the Atlantic facade in relation to theories of demographic displacement is reviewed in a number of articles published since 1992. His latest field project is the excavation (together with French colleagues) of a prehistoric burial mound at Prissé-la-Charrière in western France.
As Deputy Director of the McDonald Institute he is involved with the wider research programs of the Institute, which include field projects in Europe and the Middle East, and laboratories specializing in the analysis of faunal and botanical remains from archaeological sites.

E-mail address: This email address is being protected from spambots. You need JavaScript enabled to view it.

Mystery of the Maya (Canadian Museum of Civilization)

The University of Memphis Institute of Egyptian Art and Archaeology

Collapse; Why Do Civilizations Fall: Mesopotamia

How Secure Is Our Food Supply? (The Natural Food Hub)