This ArchaeoVideo Field Communiqué takes you on location to a dig site on the East Coast of the United States in the state of Maine with a team of historical archaeology researchers, students and volunteers led by Dr. Jeffrey Brain of the Peabody Essex Museum of Salem, Massachusetts.

Ten miles south of what is now Bath, Maine, near the mouth of the Kennebec River, English colonists, with George Popham as their leader, established Fort St. George in the year 1607, the same year Jamestown, Virginia, was founded. The Popham colonists abandoned the fort after a year of occupation and the site appears to have been vacant for two centuries. This fact becomes the major archaeological importance of the Fort St. George site: it means that we can now look at that critical, initial year of English colonization in considerable detail and begin to understand what life of the colony was like in 1607-08.

Comments from Dr. Jeffrey Brain begin with The Popham Colony: Opening Remarks in the player above.

Compare these drawings: (1) a contemporary artist's depiction of how Ft. St. George may have looked, and (2) the 1607 site plan or map of the fort drawn by one of the Popham colonists, a cartographer named John Hunt. In both pictures note the long segmented building (center right) inside the fort's west wall - "the Storehouse" -- as well as a house type structure ("the Admiral's House" or Raleigh Gilbert's house) standing perpendicular to and just north of the Storehouse. The John Hunt map is providing invaluable information to the Popham Project archaeologists as they search for what remains of the fort.

Comments from Dr. Jeffrey Brain about the John Hunt Map begin with The Popham Colony: Fort St. George in the player above.

A building method called "earth-fast" construction was employed by the English and others at this time in history. Archaeologists at Fort St. George used the John Hunt map to locate earth-fast post holes of at least two of the original structures erected there. The Popham excavations stand in sharp contrast to those of Jamestown, Virginia, an English colony established the same year as Ft. St. George. Because Jamestown was occupied continually for a century after it was founded, layers of earth containing the remains of different time periods have sometimes mingled, thereby disturbing the earliest deposits of artifacts and remains of buildings and making it difficult for archaeologists there to interpret what they have uncovered. However, researchers at the Ft. St. George site are finding remnants of buildings, and features within them, including a hearth in Raleigh Gilbert's house, as well as various artifacts which have not seen the light of day for over 390 years.

Comments from Dr. Jeffrey Brain about Using the John Hunt Map begin with The Popham Colony: Earth-Fast Construction, Part 1 in the player above.

Comments from Dr. Jeffrey Brain and team about Post Holes and Post Molds begin with The Popham Colony: Earth-Fast Construction, Part 2 in the player above.

Comments from Dr. Jeffrey Brain about Raleigh Gilbert's Hearth begin with The Popham Colony: Earth-Fast Construction, Part 3 in the player above. 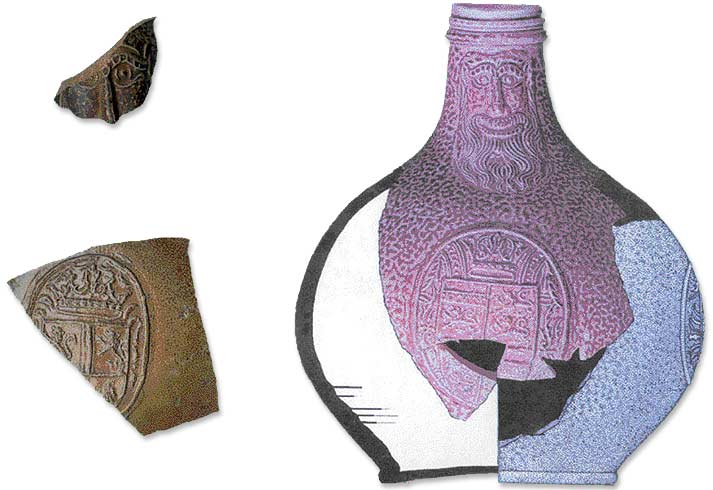 The main focus of the Popham project archaeologists during their summer 2000 excavations was to locate a building thought to have been occupied by a man named Raleigh Gilbert (named on the John Hunt map as "the Admiral's House," but often referred to by Popham archaeologists as "the Raleigh Gilbert house."). Gilbert was second in command of the colony and probably a distant relative of George Popham. He was also the nephew of, and named after, Sir Walter Raleigh. Indeed, artifacts found at Raleigh Gilbert's house point toward its occupant as being a man of high status due to the type and quality of certain objects, like the ones shown here--fragments from a 17th century, German-made stoneware "Bellarmine" jug.

Comments from Dr. Jeffrey Brain about Raleigh Gilbert's House begin with The Popham Colony: Bellarmine Jug in the player above.

This iron caulking tool was discovered by Popham project archaeologists in an area believed to be "The Storehouse," the long building shown on John Hunt's map and identified as such on it. Ship carpenters used caulking tools like this one to pound an oil-coated fiber sealant, such as hemp, into the cracks between planks on a boat's wooden hull to protect it from leaking water. One of the most interesting aspects of the excavations at Fort St. George is that the colonists probably built a sailing vessel there, a small ship called a "pinnace," which would have been the first of its kind built by English colonists on the shores of America. Such a ship is seen in the lower portion of the John Hunt map and was mentioned several times in documents of the period.

Comments from Dr. Jeffrey Brain about The Storehouse and public life of the colony begin with The Popham Colony: The 17th Century Caulking Tool in the player above.