An interview with Dr. Dennis Jenkins

In this interview, conducted at Paisley Five Mile Point Caves on June 13, 2007, by Rick Pettigrew of ALI, Dr. Dennis Jenkins describes the remarkable discovery of human DNA in coprolites dated between 14,000 and 15,000 calibrated years ago. This evidence, reported in the 3 April 2008, issue of the journal Science, strongly supports the proposition that human migrants to North America arrived at least 1000 years before the widespread Clovis complex appeared. The data also support the conclusion that the first human population originated in northeast Asia. Dr. Jenkins, standing in the very spot where his field school team recovered the evidence, relates why and how the excavation was carried out, explains the significance of the find and shares his personal reflections on making a momentous discovery. Images woven into the interview show the environment surrounding the caves and the student archaeologists comprising the field crew. 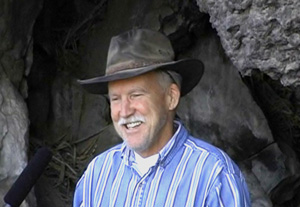 Dennis L. Jenkins received his B.A. (1977) and M.A. (1981) degrees from the University of Nevada, Las Vegas (UNLV) and his Ph.D. from the University of Oregon in 1991. He is an Archaeologist/Field School Supervisor for the Oregon State Museum of Anthropology/Museum of Natural and Cultural History, University of Oregon. As Co-Director and Supervisor of the University of Oregon Archaeological Field School, Jenkins has worked for much of the last 15 years on the archaeology of the Fort Rock Basin and Chewaucan Basin areas, focusing on paleoenvironmental studies, lacustrine adaptations, settlement and subsistence patterns, exchange systems, and the evolution of hunter-gatherer foraging strategies in arid landscapes. His primary research interests involve Late Pleistocene to Middle Holocene cultural transitions and settlement-subsistence issues among hunter-gatherers of the Great Basin. His archaeological experience spans some 31 years with more than 100 excavations. Jenkins began work in the Fort Rock Basin during the summer of 1986. He hired on with the Oregon State Museum of Anthropology, where he currently works as a Senior Research Associate, in l987. He directs excavations related to highway construction projects in the Northern Great Basin and adjoining regions. His research includes the application of specialized analytical techniques involving DNA and obsidian sourcing and hydration and prehistoric bead type and distribution analyses.

Jenkins has authored or coauthored numerous publications, including co-editing (with C. M. Aikens) the 1994 volume, Archaeological Researches in the Northern Great Basin: Fort Rock Archaeology Since Cressman (University of Oregon Anthropological Papers No. 50, 1994), and more recently Early and Middle Holocene Archaeology of the Northern Great Basin (University of Oregon Anthropological Papers No. 62, 2004).

His most recent research involves the recovery of human DNA from pre-Clovis coprolites recovered with extinct faunal remains (camelids, horses, bison, and pika) in the Paisley Caves.

University of Oregon Museum of Natural and Cultural History