The third generation of the influential Leakey clan reflects on the beginnings of humanity and the relevance of this research to us all today.

In this interview, conducted on May 1, 2007, by Rick Pettigrew of ALI, Dr. Louise Leakey discusses the subject of human origins and her life as a paleoanthropologist. Dr. Leakey, who grew up in Kenya as the latest generation of the world-renowned Leakey family, was the Keynote Speaker for the 2007 edition of The Archaeology Channel International Film and Video Festival, hosted by ALI in Eugene, Oregon. On the day of her address to the Festival, she and Dr. Pettigrew paused in the lobby of the Hilton Eugene Hotel to have a conversation on her favorite subject. The discussion included both personal reflections on her life as a Leakey and issues of human evolution and its relevance to people today. With remarkable candor and warm personality, Dr. Leakey demonstrates that exploring the deep human past is much more than a purely academic subject. 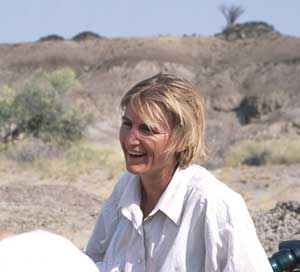 Fourth-generation Kenyan Dr. Louise Leakey (Ph.D., London University) has upheld the Leakey family legacy in the search for human origins through continuing research with the Koobi Fora Research Project in the Turkana Basin of northern Kenya. Daughter of renowned palaeoanthropologists Meave and Richard Leakey, Louise is now a National Geographic “explorer-in-residence.” She leads the exploration and excavation project at Lake Turkana, made famous through the work of her parents for its many contributions to the human fossil record. For 35 years, the rigorous process of search, excavation, and paleoecological and geological analysis in the Turkana Basin has made it one of the most comprehensive field efforts yet organized to explore human origins and evolution.

One of the research team’s most recent (2001) and publicized discoveries was that of a new species, Kenyanthropus platyops, which extends diversity in the human fossil record back to 3.5 million years. This find, announced in the journal Nature, had profound implications for our understanding of human origins. In a front page article, The New York Times reported that “this discovery threatens to overturn the prevailing view that a single line of descent stretched through the early stages of human ancestry.” Joined by a team of Kenyan fossil hunters, the research team also is rigorously searching the rocky terrain for remains of animals that lived 1-4 million years ago in an effort to reconstruct the habitat in which our species evolved.

In addition to the long term field studies in the Turkana Basin, Dr. Leakey has worked closely with the local communities to increase funding for local schools and medical centers. In addition, she has spent considerable time working alongside the Sibiloi National Park authorities to ensure the protection of some of the richest fossil sites within the Park boundaries. Piloting a light aircraft, a Cessna 206, across remote terrain, Leakey conducts aerial surveys, spotting wildlife and illegal livestock incursions into the Park, as well as ferrying scientists and supplies to their remote field stations at Lake Turkana. Dr. Leakey also works alongside wildlife authorities to preserve the unique plants and animals of Kenya’s remotest National Park and World Heritage Site. She is involved in several community projects at Illeret, a town close to the Ethiopian border, in an effort to improve the welfare of people on the National Park boundaries. Dr. Leakey was recently named a Young Global Leader for the World Economic Forum, in recognition of the importance of both her scientific contributions and community efforts.

Dr. Leakey lives in Kenya with her husband, Emmanuel de Merode, and their two young daughters. An avid photographer and a conservationist, she sits on the advisory board of Sea Shepherd International, whose efforts in the Galapagos have given the islands world attention. Among her other pursuits, she manages the Leakey family vineyard where, on the edge of the Great Rift Valley, they produce one of East Africa’s finest Pinot Noirs.